The Economics of Fun: How to Measure Success in Life

Today's post is just because I don't want to forget this idea and I don't know where else to put it for now. It is a quote from Steven E. Landsburg's book, "The Armchair Economist." The idea links with the rest of these quotes from pages 42 and 43:

"Let the computer reward profitable trades by printing counpons that students can exchange for consumption goods of real value: movie tickets, pizza, a kiss from the graduate student of their choice. Students can spend coupons as they arrive, or save them for the future, or borrw them from other students who are willing to lend. For each student, there comes a randomly selected day when his terminal informs him that his character has died; his savings are transferred to a designated heir and his own consumption opportunities come to an end.

"That's it. You receive no grade for playing this game. There is no instructor looking over your shoulder. Nobody ever tells you that you did well or did poorly. You live and you die, and if you play well you collect rewards. If you decide it's not worth the trouble to play well, that's fine too.

I wonder what my parents would think of this idea? I contemplate it on the anniversary of my mother's birth (b. 1918; d. 2007) who would have been 92 today, which is of course an Alice in Wonderland thought. But I like imagining the impossible if not the improbable.
Posted by The Gutter Artist at 7:31:00 AM 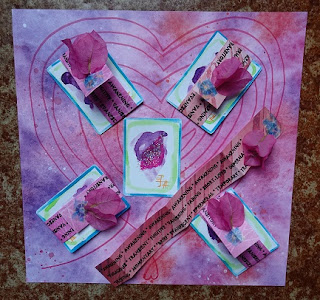