ATC's Are for Everyone, Even if You Can't Draw

How many times have I heard the words, "I can't draw a straight line." Fortunately, that's what rulers are for. Anybody, and I mean anybody, can make Artist Trading Cards.


Everybody Is an Artist:

Anybody can make ATC's. But not everybody knows "the trade is the thing." The idea is that you trade your hand-made cards with other people who produce cards, either at Trading Sessions or whenever you meet other people in person to trade. The meeting in person to trade is essential to the concept of ATC's. It is O.K. to trade by mail or to participate in editions, but the main purpose of this performance is the trading session and the personal meeting. We meet in Lyons, Colorado, the third Saturday of every month, at the Lyons Depot Library, in Lyons, Colorado.

I've been swapping ATC's with other Artists since 2004. My collection is my most valued possession. Here is one of 9 from my Winter Solstice series from 2004.


A Personal Note: When my mother left home to go to the University of Colorado in 1935, Grandmother gave away Mom’s treasured collection of early baseball cards because she thought Mom had "outgrown them." Needless to say, Mom was devastated. I would imagine the collection, had it remained in the family, would be worth a small fortune today. Note to relatives: Please don't just throw out my collection of ATC's when I die. They might just possibly be worth something to collectors in the future. Or not.

Trading art with other artists, not exchanging money, is the fun part. I wonder where this card is now? I made it and traded it in 2004.

Trade. It's right in the name. Purists say it is not about the money. Participants in trading sessions should not be charged any fees: the point of the project is the exchange of cards as well as the in-person or by mail exchange of ideas. The process of "trading" is central to the idea of ATC's. Interaction between artists is integral to the production /performance /exchange aspect of the art, and, by definition (it's right in the name), ATC's should not be sold. Thus, size restriction, sometimes thickness, artist contact information, and the "free" in-person exchange are the only "suggested" boundaries. Of course, there is now a collector aspect to trading cards, which is called ACEO (Art Cards, Editions and Originals). Some artists make their cards available to the public, usually at a very affordable price. 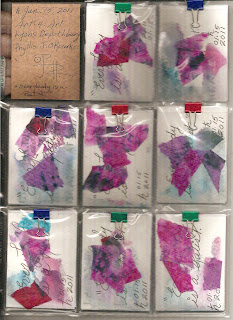 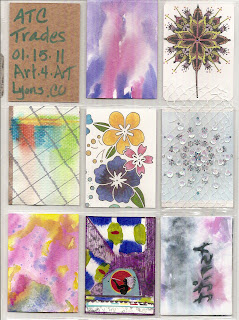 My ATC this month was a process using a Jet Printer with water bleeds on HP text paper and many type faces, water color paper cut to size 7" by 2 1/2" and folded in half to meet the 2 1/2" by 3 1/2" size requirement for ATC's, tissue paper blots (or color barfs, if you prefer), pasted text describing my sources of inspiration, and then placing all the contents in a baseball trading card sleeve, with a colored mircro binder clip to keep it all in place. See previous blog for the text of the sources of inspiration. 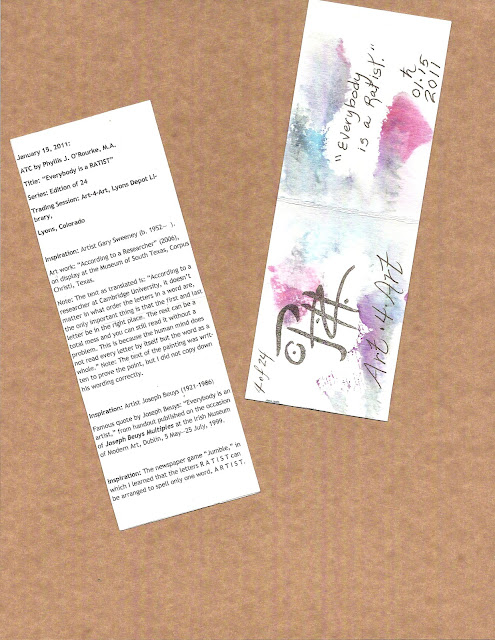 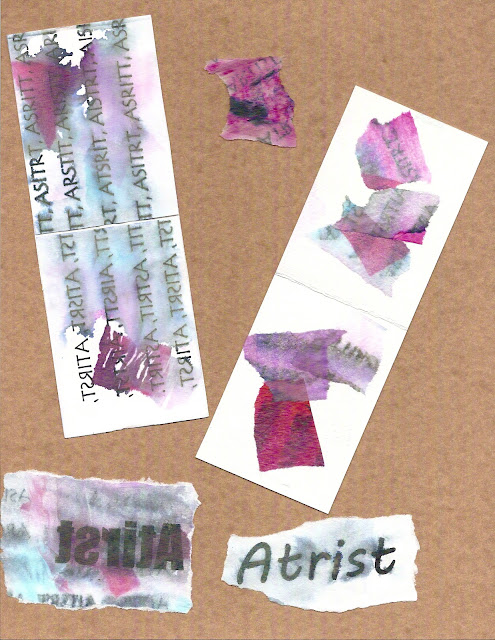 The idea for this journal entry has been building over the last few months. I decided to turn the journal entry into this month's trading card. I will publish my trades and my finished cards soon.

The text of Gary Sweeney's painting is translated as: “According to a researcher at Cambridge University, it doesn’t matter in what order the letters in a word are, the only important thing is that the first and last letter be in the right place. The rest can be a total mess and you can still read it without a problem. This is because the human mind does not read every letter by itself but the word as a whole.” Note: The text of the painting was written to prove the point, but I did not copy down his wording correctly.

Inspiration: Artist Joseph Beuys (1921-1986)
Famous quote by Joseph Beuys: “Everybody is an artist,” from handout published on the occasion of Joseph Beuys Multiples at the Irish Museum of Modern Art, Dublin, 5 May—25 July, 1999.

This is one of 9 in a series of ATC cards made by the Gutter Artist in 2004 for Winter Solstice at the Lyons Depot Trading Session in Lyons, Colorado.

ATC's, miniature works of art  (2½ " by 3½ " or 64 by 89 mm) are created on heavy paper or any stiff backing material (as long as the material is at least as heavy as card stock but thin enough to insert into a standard plastic trading card sleeve). Some cards are now being created that "violate" the thickness requirement. The back of each card usually includes the date, the artist's signature or chop, and any contact information the artist wants to give. It is interesting for collectors to know the card's origin: city, state, & country. Many artists create ATC's with 3-D features: windows, folds, multiple pages, pop-ups, sliding panels, moving parts, hidden messages, and secret treasures.  These thicker, more three-dimensional ATC's can be stored in special boxes and containers, rather than the traditional baseball card display pages.
Posted by The Gutter Artist at 1/15/2011 06:40:00 PM No comments:

The Trade is the THING. This is one of my first ATC's made in 2004. I do not know who has it or what card I traded for it.

ATC's are a conceptual and performance art form using any medium or technique: collage, rubber stamping, painting, sewing, drawing, weaving, found images, screen printing, fine-lettering techniques xerography, photography, metal work, paper folding (origami), and digital imaging. The ATC's can be originals (one of a kind), a series (each made separately, but designed to look alike), or short-run editions (identical, usually printed digitally), but all are, most importantly, self-produced. If the trading cards are part of a limited series, they are ordinarily labeled as a series & are numbered (1/10; 2/10; 3/10; etc.)
Posted by The Gutter Artist at 1/14/2011 06:30:00 PM No comments:

Who Created the first ATC?

In the late 20th Century, the artist M. Vänçi Stirnemann is credited with having the "first" Artist Trading Card (ATC) exhibition, where he displayed 1,200 cards he had produced at his INK.art&text bookstore/gallery in Zürich, Switzerland, April 23-May 17, 1997. Stirnemann, on the last day of the show, allowed anyone who created a hand-made ATC to trade it for any card displayed in the show. In collaboration with Cat Schick, he has been promoting the idea ever since. In September 1997, Don Mabie (a.k.a., Chuck Stake) brought the first ATC Session to Calgary, Canada, at the New Gallery. In the last 10 years, ATC’s sessions spread world wide, and many trading groups can be found on the web. Our group in Lyons, Colorado, was started in 2003, and meets every third Saturday, at the Lyons Depot Library at 3:30 p.m.
Posted by The Gutter Artist at 1/13/2011 06:19:00 PM No comments: 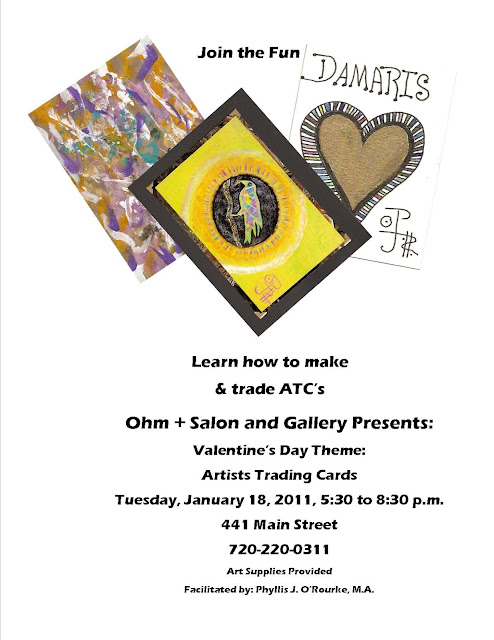 We meet the third Saturday of every month at 3:30 p.m. in the Lyons Depot Library, 5th Avenue and Broadway, Lyons, Colorado, U.S.A. We are indebted to our local librarian, Merlyn Williams, who started the group in 2003. Use your favorite search engine to find out more about ATC’s. The information in this blog has been compiled from my personal experience as well as varrious sources on the Internet (including Wikipedia.org), from Expression Magazine, and from the books: Artist Trading Card Workshop by Bernie Berlin; and Artist Trading Cards: An Anthology of ATC's, a Somerset Studio® Publication. The artist and editor of these pages starting making trading cards in December 2004 for Winter Solstice at the Art-4-Art Trading Group.

History: Miniature art has a long history. Small art cards were all the rage in the 16th century. Most were portraits and were sold, not traded or given away. They were the first wallet "photos." Men would have nudes painted of their mistresses on art cards (probably without their wives knowing), usually by the same artist who created the larger family portraits of their wives & children.

In 1887, "baseball" cards started to appear. These early cards are now very rare, and it is uncertain what they were made of. They were not mass produced until the golden years of baseball (1902 - 1935). Cards during this time were usually sold with bubble gum, chewing tobacco and cracker jacks.
Posted by The Gutter Artist at 1/10/2011 05:27:00 PM No comments: 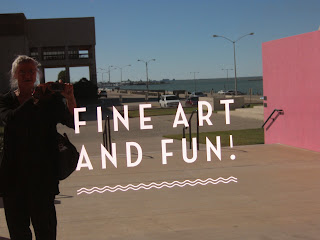 In an act of high gutter art, some "puckish mystery scoundrel(s)!" conned Art+Auction's online "In the Air" gossip column with a fake Smithsonian's National Portrait Gallery web site and press release. For background on this sad story of art censorship in America, see the article in the Huffington Post Blog: http://www.huffingtonpost.com/michael-b-keegan/smithsonian-just-put-the_b_805711.html

In an equally courageous act of high gutter art, two men have created "The Museum of Censored Art," after hosting a successful fundraiser on Saturday, January 8, to defray costs for their new museum http://theendofbeing.com/2011/01/07/museum-of-censored-art-smithsonian-protesters-return-with-permits/

After being banned from The Smithsonian's National Portrait Galery for showing the censored video "Fire in My Belly" on an iPad, Michael Blasenstein and Michael Iacovone are opening the "Museum of Censored Art" in support of art and free speech in America. Here's the link to the article: http://www.advocate.com/News/Daily_News/2011/01/05/Museum_of_Censored_Art_to_Launch


Starting Jan. 13, Blasenstein is converting a 8 x 40 feet trailer into a screening room to show David Wojnarowicz's "A Fire in My Belly," the video that created a firestorm at the Smithsonian Institution and among conservative politicans and supporters of the arts and freedom of expression....The trailer will be parked in the 700 block of F Street N.W. from Jan. 13 to Feb. 13, the last day of the show. The screening hours will be from 11 a.m.to 7 p.m.


In the hopes of encouraging others not to believe everything you read and everything you see, and everything you think you believe, I am linking to the prankster's fake site, the real Smithsonian National Portrait Gallery web site, and the January 9, 2011, ArtInfo post about David Wojnarowicz (1954-1992) and his artwork, "Fire in My Belly," the 1987 video that was removed from the Smithsonian's show: "Hide/Seek: Difference and Desire in American Portraiture."

My First ATC's for Winter Solstice, 2004

I did not keep any of the cards from my first trade from 2004 for myself, but I did scan each one of them into my computer. Using a crow stencil with black arcrylic paint on torn pieces of bark paper, I made 9 cards on a sheet of card stock. Burning the edges of the bark-paper image, I positioned each crow on top of magazine collage papers. As a final touch, I glued a small Balinese gambling card on each one. As I looked at each card, a name came to mind. Starting with today's blog, I will post these early images between now and the upcoming ATC Playshop on January 18, 2011, in Lyons, Colorado.
Posted by The Gutter Artist at 1/09/2011 06:03:00 PM No comments: