Latitude and Longitude and GPS Coordinates: 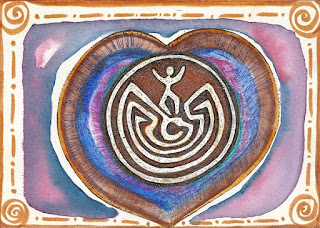 On the 6th Anniversary of Colorado's Great Front Range Flood, we commemorated the Lyons Memorial Labyrinth with a candle light full moon walk and with a Day of silence from dawn to dusk on September 13, 2019. This dedication and consecration took place on the fifth anniversary of its initial construction, which began one year after the flood in Lyons, Colorado (2013). (On September 13, 2019, moonrise, 7:26 pm; full moon, 10:35 p.m.) If you are in Lyons, at 5th Avenue and Meily, Street, going east past the South St. Vrain Trail head marker, turn south (right). The Labyrinth is tucked among the trees on the left side of the trail on the the bank of St. Vrain Creek. Visitors to the Lyons Memorial Labyrinth will be pleased to find that the 3-path labyrinth has expanded to 7-paths over the summer of 2015. During the Spring of 2018, several paths have been expanded and there are now stone steps down to the river thanks to the River Restoration crew. The paths have been expanded during 2019.

Here is a link to a you tube video showing the labyrinth as it was in September 2016: