My ATC's for September 2013, cancelled due to unprecedented flooding in Lyons, Colorado, on September 11, 2013. The background was painted by Sandra (Sheronah) Leamele who gave the painting (before she moved away from Lyons ) to Loretta Milburn who gave it to me. I added the river of stones and some purple magic.

THE MAZE WAS NOT AMUSING

This was no ordinary wolf morbidly masquerading as aqua vitae


facing into the  abyss now filled with melancholic memory

this madly swimming oceanic mother of our town's river twins

takes shelter beneath the poison tree 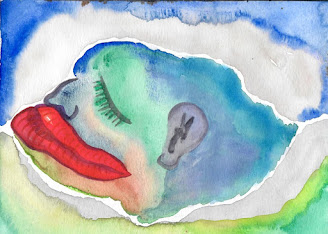