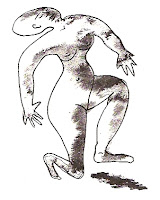 
Gouttière = Watercourse or Gutter: In the Western Hermetic Tradition, the channels, grooves, or gutters between and including the 10 Emanations or Sephirah on the Tree of Life are called the Thirty-Two Paths of Wisdom. The 21st Path (Key 12), connecting Geburah with Hod, is the Stable Intelligence, represented in Tarot by The Hanged Man (also assigned to Key 12 are: the Law of Reversal; Mind in suspension; water; and the planet Neptune, which is the higher octave of Venus). The Hanged Man’s head, surrounded by an aureole or halo of light, rests below the surface of the earth in a worn watercourse.


Gutter or Watercourse: Nouns: brook; channel; furrow; ditch; gully; groove worn by running water; dry bed of a river of Tertiary Age containing alluvial gold, also called bottom (Australia); drain or rainpipe; trough used to get rid of waste material in a corral or pen for livestock; white space between the facing pages of a book; channels on either side of a bowling alley; lowest social class of a city (e.g., raised in the gutter and condemned to a life of crime). Verbs: To flow in channels or rivulets; to burn with a low flame; to flicker; to melt away through the channel formed by a burning wick (said of candles).